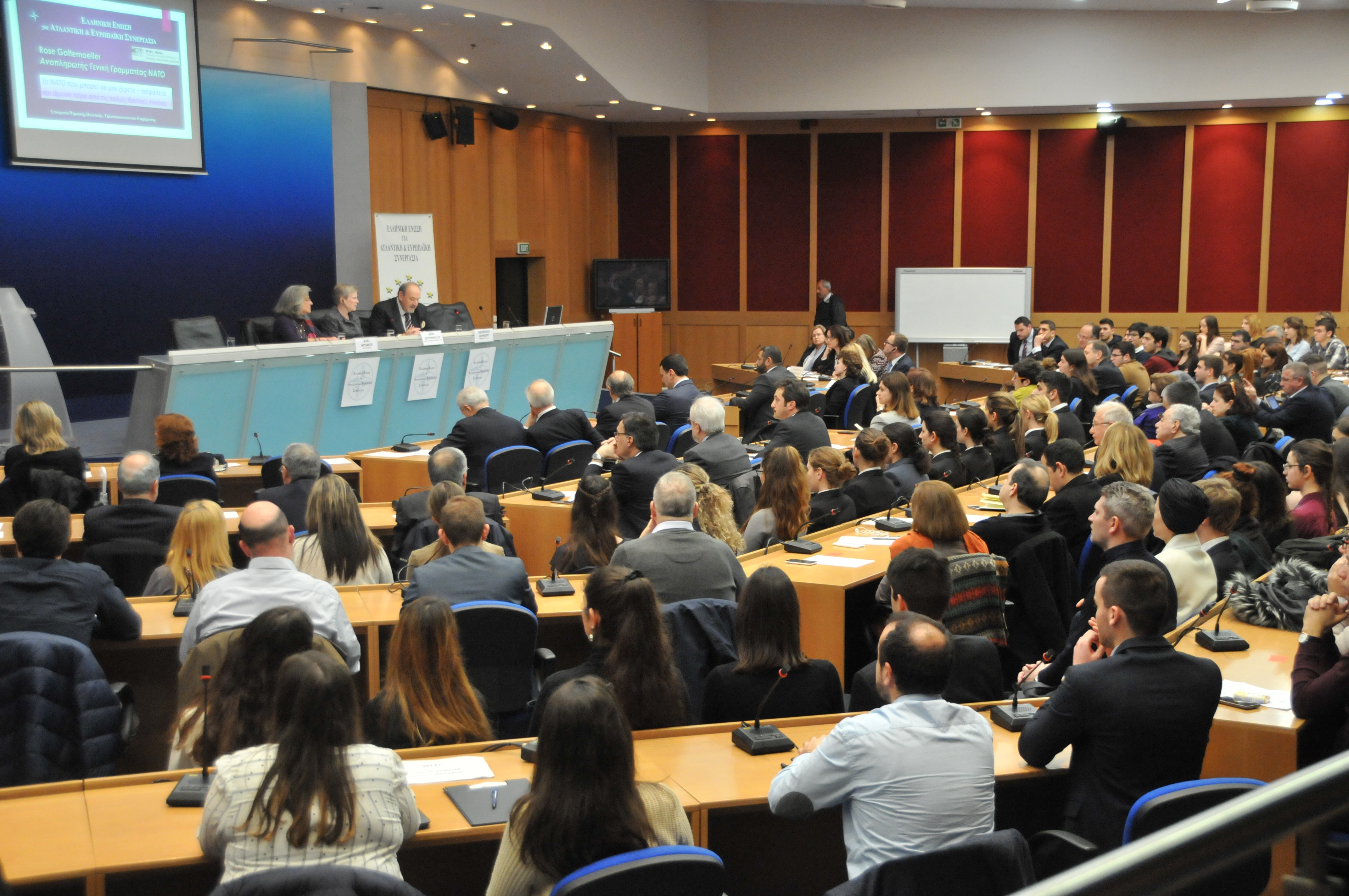 On the occasion of the first official visit to Greece of the Deputy Secretary General of NATO, the Honorable Rose Gottemoeller, the Greek Association for Atlantic and European Cooperation (G.A.A.E.C.) in cooperation with Women in International Security (WIIS)-Hellas organized a flashing event on Friday 2 March 2018, at the Ministry of Digital Policy Telecommunications and Media Conference Hall.

Ms. Gottemoeller spoke on “The NATO you might not know-security and defense beyond the old basics” followed by a debate with the over 200 participants, of Government officials, Ambassadors from many countries and the Hellenic Ministry of Foreign Affairs, Senior Officials of the Hellenic Armed Forces, Police and Coast Guard, representatives of Women Organizations, NGOs, think tanks, University professors, but also a large number of University students, young military officers and the students –attaches of the Diplomatic Academy with their Director, Ambassador Ioannis Papameletiou.

The President of the Greek Association for Atlantic and European Cooperation Mr. Theodossis Georgiou welcomed the Deputy Secretary General citing the role of GAAEC in providing a “forum” for discussion as “public support can provide legitimacy to the goals of the Alliance, but public support requires an educated and informed public, and this in one of the missions of G.A.A.E.C. and our Atlantic Associations.’’

The Secretary General of the Ministry of Digital Policy, Telecommunications and Media, Mr. Georgios Florentis, welcomed The D.S.G. and mentioned that “this has been the second time in less than a year that the Greek Association for Atlantic and European Cooperation has been welcomed at this auditorium, meaning that Mr. Theodossis Georgiou and Dr. Aliki Mitsakos accomplish an extraordinary job to the purposes of the Transatlantic Cooperation. Since the beginning of NATO, Greece remains one of the most credible members of the alliance and a key player to the promotion of stability that NATO represents today. Discussions/Panels like this one today contribute the most to this promotion.”

Dr. Aliki Mitsakos, Dean of The International Center for Leading Studies (TICLS) representing WIIS-Hellas referred to the implementation of U.N. 1325 by NATO and the appointment of the first female D.S.G. and second most senior civilian in the hierarchy of NATO, connecting the event with the approaching Women’s International Day. Dr. Mitsakos referring also to the first Police Lt. General Z. Tsirigoti, present, that they have worked hard not only in their field of expertise but also in their broader environment, stressing the importance of security on the human level, particularly for the women and children as the more exposed section of the population, but that gender must not be an obstacle in attaing goals. She also presented the outstanding CV of the honorary Speaker beyond major Think Tanks as the Under Secretary for Arms Control and International Security at the U.S. Department of State, Assistant Secretary of State for the Bureau of Arms Control, Verification and Compliance and the chief U.S. negotiator of the New Strategic Arms Reduction Treaty (New START) with the Russian Federation, which entered into force on February 5, 2011 and is currently in implementation.

The D.S.G. of NATO Mr. Rose Gottemoeller set out the Alliance’s essential role in a more uncertain world, highlighting the value of Allies’ collective efforts and thanked Greece for its contributions to NATO activities, so security is ensured in the eastern Mediterranean and the Western Balkans.

Going through a few examples of where “NATO gets beyond the normal notion of collective defense, the NATO you might not know”, the first one is an area where Greece has played an enormous role, and that is in the combatting of illegal human trafficking. “what we are doing in NATO, we are going to be focusing on this problem over the next two years, in a work programme that will intensify our efforts, to develop a wider and wider spectrum of work, together with a number of different communities, on tackling these important and very severe problems for humanity. But, with Greece's help, NATO has already been working in the Aegean and the Mediterranean to combat illegal human trafficking. Since 2016, NATO’s deployment in the Aegean Sea has helped curb illegal and dangerous human trafficking, working with Greece, also with Turkey and the EU’s border agency, Frontex.

Second, our deployment provides an additional platform for cooperation among Greece, Turkey and the European Union, regarding the refugee and migrant crisis.

Talking more about UN Security Council Resolution 1325 as we approach International Women's Day on March 8th, “this is something that is year round for the NATO Alliance. At the 2014 Wales Summit, NATO leaders acknowledged that the integration of gender perspectives contributes to a more modern, ready and responsive NATO. Gender is an important focus of NATO's cooperation with other international organisations, once again, the EU and the United Nations, and also with civil society, so I am glad to see that there are so many representatives of civil society here today. Put simply, we believe very strongly that peace is best secured through inclusion. Today, NATO is working to ensure that gender perspectives are incorporated into all aspects of policy, doctrine and training. This is not only the right thing to do, but it is also the smart thing to do. It's how you get more effectiveness out of your military forces, if you have everyone working together in this way.”

The former Assistant Secretary General of NATO, Ambassador ad.h. Mr. Thrasyvoulos Stamatopoulos commented on his experience in NATO and how the work done “is a bit like an iceberg, you only see the top one-third and there's a lot going on below.Let me amplify a little on what you mentioned, but there's so much more along these lines like working on children and conflict working with organizations like the OSCE and even the Red Cross.” Dialogue, he said, “complements the totality of what NATO has become, not so much a defense organization or not only, but a broader security and a political military organization. not only a military organization.”

The second part on the event was an interesting and vital discussion with the participants.

Mrs Zeta Makri President of the Women Political Association, former member of Government and the Hellenic Parliament, opened the discussion with a question about the implementation of UN resolution 1325 in NATO and the integration of gender aspects into the security sector.

Students, but also Ambassadors ad.h. Georgios Kaklikis and Karolos Gadis, contributed to the discussion with questions relating to the current unstable security situation particularly in the Aegean, referring to the recent incidents with the neighboring country, as well as on the NATO EU relations.

In regard to Turkey and their stance in the South East Mediterranean she responded that NATO is a big family and any family is not without disputes, and the message from NATO headquarters is to try to facilitate the solution of serious problems by discussion, emphasizing that that NATO is an alliance that operates through consensus around the table.

Asked about Putin's earlier announcements of new nuclear weapons in Russia she said that the US anti-ballistic shield is against North Korean aggression rather than Moscow and were not designed to in any way counter the Russian strategic offensive deterrence. Mrs. Gottemoeller called it "a bit of a non-sequitur" to say U.S. missile defense systems had been made ineffective, as they had been designed with North Korea, not Russia in mind, adding "it's the balance of strategic offensive forces that keeps the peace, not an attempt by one side or the other to defend against missiles."

Questions from the younger participants included the gender perspective as in “As a woman who is a leading position, you may have faced a lot of difficulties. I guess it is quite interesting for us young women to hear all these difficulties and maybe a few advice” the advice being “never apologize” for a question, citing her experience from College, and the youth query in “what exactly does NATO do for young people and what are the opportunities that it has to offer?” saying “there are several ways that you can come and see what NATO is all about and really help us to move into the future”, related to the Internship program, among others.

Rose Gottemoeller summed up thanking the great audience for “the opportunity to talk with you. I wish we had more time for questions and answers, but fantastic questions” adding “I do hope to see you at some point in NATO”.

{gallery}118{/gallery}
back to top
FaLang translation system by Faboba